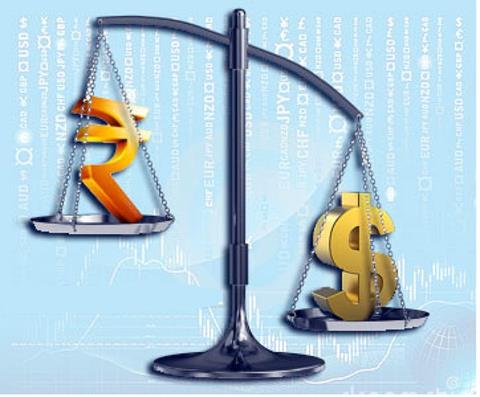 USD INR exchange rate: Major trends in past few  years and where is it heading ?

It is believed that there is significant downside risk to USD-INR exchange rate and here are some of the risk factors behind this.

In History, the major economies of the world were following the gold standard. The value of the rupee was severely impacted when large quantities of silver was discovered in the US and Europe. After independence, India started following a pegged exchange rate system.

In June 2008, the rupee appreciated to a ten-year high of US$39.29. The stability of the Indian economy attracted substantial foreign direct investment, while high interest rates in the country led to companies borrowing funds from abroad.

What happened in financial crisis?

The global financial crisis exerted pressure on crude oil prices, which gradually plummeted to below $50 a barrel. Since oil became cheap, oil companies started buying more oil. So they started purchasing more and more dollars. Now since the demand of dollars increased, the rupee started weakening. So, on March 5, 2009, the Indian currency depreciated to a record low of US$52.06. The US dollar’s gains against other major currencies also weighed on the rupee. At March 2009 end, the rupee stood at: 1 USD = 50.6402 INR

So, the relation between financial crisis, oil prices and USD INR in one line is:

Where is the USD- INR heading?

While the USD INR exchange rate has been very stable overall for the last five years, there have been periods of significant volatility. Lets consider 3 cases. Case 1: Rupee depreciates. Case 2: Rupee appreciates, and Case : Rupee remains at the same level.

It is believed that in next two years the probability of the first case is the highest (about 50%) while the other two cases have an equal probability of approximately 25% each. The Indian government and RBI are well aware of this risk and are definitely hoping for the third case, in which India essentially grows its way out of trouble over a couple of decades and where they only have to intervene occasionally to smoothen out excess volatility.

First Case – Rupee Depreciates:
If FII money “exits” because of a crisis of confidence or if oil prices continue to rise.  Based on past evidence, even a relatively orderly outflow of USD 15 billion of FII money over a year could result in the INR depreciating by 22–30%. This would imply an exchange rate in the range of INR 55–60 to USD. It could get even worse if the flight of capital were to take place over a shorter period. This would imply a higher cost of petrol, diesel, and petroleum products in India, leading to even higher food prices and Consumer Price Index.

Second Case – Rupee Appreciates:
If FII money continues to flow in and FDI levels improve. An appreciating Rupee will make imports cheaper and lead to better managed deficits and inflation. The flip side is that Rupee appreciation would erode India’s cost advantage in the export sector especially the booming ITES sector and likely invite government intervention.

The exchange rate continues to move in its current range and slowly appreciates over the long term as the economy continues to develop and India strengthens its position in the global markets. The government’s efforts to improve agricultural infrastructure bear fruit in the longer term and inflation declines. Exchange rate fluctuations do not cause any major disruption in the trade environment.

We hope you enjoyed reading this article. To keep getting regular updates from the world of financial markets, subscribe us via Email and we will deliver our next article, right in your mailbox!

Rupee struggling to get up