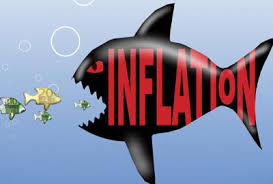 Inflation: Why it happens and measures to control it

Understanding Inflation : One problem that has troubled the brains of the laymen and economic experts alike is inflation. Moreover, this is something which most of us do not understand correctly and thus it is difficult to deal with.

What inflation is not?

Relative change in prices of goods and services due to changing demand and supply.

What inflation actually is?

Phenomenon in which average price of goods rises over time in a sustained manner for a certain time period.

People have developed policies and techniques to tackle inflation without actually having an insight to what it is and what causes it.

Inflation, being an emotive matter, has given rise to popular resentment in many cases over the years. Even though the knowledge shared here is not intended to influence the policy decisions on controlling inflation directly, but understanding inflation in and out can have disproportionately high returns in the long term.

Lessons from the world

Understanding deflation and the countries facing it

Understanding inflation to the core is certainly the only way to manage or control it.

We hope you enjoyed this article. For regular updates from the world of financial markets, subscribe us via Email and we will deliver our next article, right in your mailbox!

A brief look at performance of RBI governor Raghuram Rajan