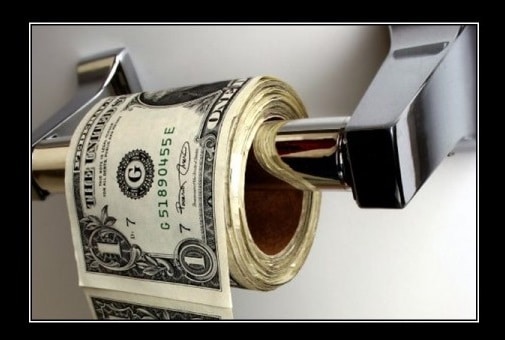 Money without a backbone

How did it become possible to make a piece of paper without any intrinsic value a medium of trading?

“start problem” – difficulty of ensuring an initial demand for fiat money demand i.e. if the fiat money is ever to emerge from barter someone must be the first to exchange real goods for pieces of paper money that, by definition, do not provide any direct consumption  services to the holder. The problem is that no person will ever give up real goods for intrinsically worthless pieces of paper, unless he believes that others will accept them too, and an agent living in a barter economy has no reason to expect them to. Each agent would therefore refuse to accept fiat money, because he expects others to refuse it as well. People will not move away from barter equilibrium, precisely because it is equilibrium.

Second, even if we could solve this first problem, there is the difficulty that agents generally face a choice of potential monetary objects, in which case we get a multiplicity of potential equilibrium involving the use of any one or more of these objects as money. The equilibrium that actually results will then depend on agents’ expectations about the acceptability of different objects, and it is not easy, to say the least, to manipulate these expectations to produce any one particular equilibrium. It will be fortuitous if all agents happened to choose only one object, and even more fortuitous if they all chose government fiat money.

Finally, the predictions of these models are at odds with the historical evidence. Fiat money did not in fact evolve in the way these models postulate: nowhere did fiat money ever emerged by means of a great leap forward from barter. Nor did fiat monies ever emerge out of thin air. Instead, fiat monies have always developed out of some previously existing money. If we are to explain the emergence of fiat money, we must therefore explain how it emerges from previously existing money, not from barter.

What kind of monetary order or regime would be most likely to provide stable money. Well in 1978 F. A. Hayek answered this question via a monetary regime which is defined by free banking and competing currencies which offer the best change of achieving stable money.

But in reality current government managed monetary system having an apex central bank with a wide discretion are likely to experience monetary instability and upset the spontaneous market demand. Supporting this theory a study of 30 currencies were conducted showing that neither a single currency was free from government manipulation or by its sister concern i.e. central bank.

Thereafter the role of government in the current monetary system there is a group supporting neoclassical approach “that leaving the monetary and banking arrangement to the market would produce even more satisfactory result”.

In order to depoliticize the money supply a system has being introduced called “free-market monetary system”. Under such a system, good money would drive out bad money as private producers found it in their self-interest to supply their customers with money of stable value. The reason behind this is that private enterprise can be expected to provide the public with money it can trust and use because it is profitable to do so, and competition will impose a discipline on private issuers to which the government has never been and cannot be subject. Unlike government, a private issuer must supply the public with money as good as that of his rivals or go out of business.

This system can be regarded as a radical reform. At last our only hope is have a stable money which can only be a way to protect money from politics

At base, money is a market phenomenon, not a creation of government. What government has done is to replace real-value money with fiat money and to divert attention away from the historical roots of money. The challenge is to study the history of monetary institutions and to develop monetary theory so as to improve current monetary institutions. Although free-market money may not be politically feasible now, it is useful to consider several different strategies for institutional change in light of the Fed’s failure to deliver money of stable value. Moreover, the future path of monetary reform will be influenced not only by the failure of current institutions but also by the public’s perception of how well alternative institutional arrangements might perform in achieving stable money and prices.

For the next part of this article, please visit Fiat Money: The Money You Have Is Worthless Paper? Part 2
About the Author:

The author Shashank Singh is an MBA finance from New Delhi Institute of Management. He is passionate about financial markets and takes keen interest in keeping himself abreast of latest developments in financial markets. He can be reached at