A brief look at tax havens around the world

Taxation not only forms the most important source in all countries but is also the prime source of government revenue. According to the recent estimates from International Centre for Tax and Development, it is found that total tax revenues account for more than 80% of total government revenue in about half of the countries in the world.

Looking from the historical perspective, the growth of governments and extent to which they are able to collect revenues from their citizens is a striking feature of last 2 centuries. Taxation patterns around the world reveal large cross country differences especially between developed and developing countries.

Tax haven meaning the jurisdiction offering favourable tax and other conditions to tax payers as relative to other jurisdictions adversely affect the budgetary revenue of countries with higher taxation thereby giving rise to increased tax avoidance particularly the law, lawful and unlawful migration to the capital causing financial instability and circumvention of financial control and crises.

Some historians mention tax haven in the form of isolated islands during the time of ancient Greeks.

Some of the tax havens of our time are as follows-

So far we discussed about tax havens and which countries are good from low taxation or no taxation perspective. But let us now take a look at the consequences of tax havens-

One way to gauge the extent to which taxation redistributes resources between individuals in a country is by looking at how the distributions of incomes change before and after taxes. The following visualization does this showing reduction of inequality that different OECD countries achieve through taxes and transfers. 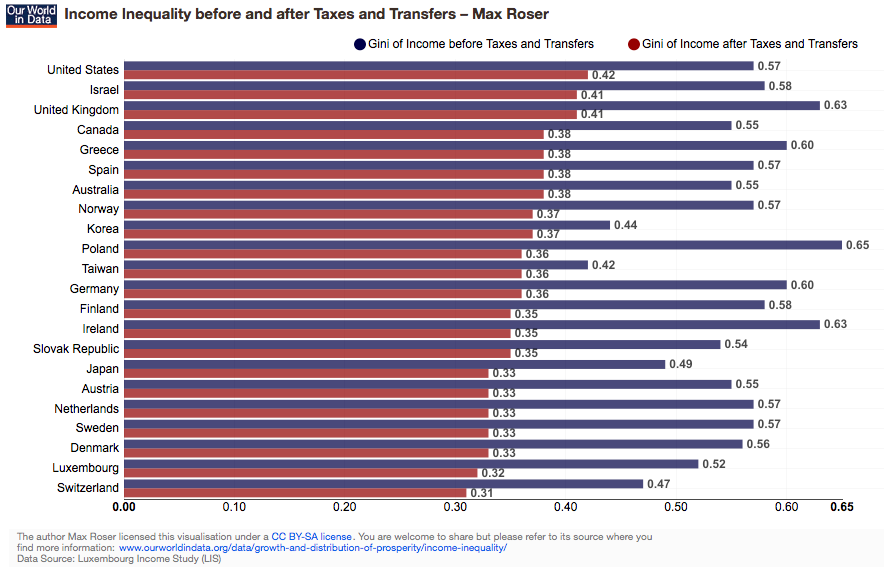 The estimates correspond to the percentage point reduction in inequality as measured by the changes in the Gini coefficients of income before and after taxes and transfers.

Generally the countries that achieve the largest redistribution through taxes and transfers tend to be those with lowest after tax inequality.

2. Taxation can lead to Efficiency losses:

In market economies, consumers and producers change their behaviour in response to taxes. For example, if a taxed good has a substitute that is not taxed, some consumers will shift to the substitute to avoid the tax. These changes in behaviour can lead to inefficiencies. For example, high tax rates may discourage labour supply and in case of rich individuals, they may even induce migration of talent to countries where tax burden is lower. In both cases the size of pie would be reduced by taxation.

Finally, coming to conclusion it is found that at one level lower taxes or no taxes in one country can put pressure on other countries for keeping their taxes low. This is good for tax payers in short term but the secrecy and opacity associated with some of the tax havens may encourage money laundering or other illegal activities that can harm world economy in long term. The crackdown on tax evaders in some countries shows that tax payers need to tread with caution.

We hope you enjoyed this article. For regular updates from the world of financial markets, subscribe us via Email and we will deliver our next article, right in your mailbox!